Skip to content
Throwback: Working at the Ministries
29 January 2020

On the 15th of January representatives of 7 Ministries of the Dutch Government were present at the event ‘Working at the Ministries’. Varying from the Ministry of Defense to the Ministry of General Affairs, the entire spectrum was represented at this event. Urios collaborated with several other study associations to organize this event and we are pleased to say that the cooperation/collaboration was a success! Upon entrance all participants where handed their personal program and thus they were ready for the evening.

Firstly, there was a plenary session during which Marieke Kleiboer, director at the Ministry of Health, Welfare and Sport, told us how she ended up working for the Ministry and what working for a Ministry entails. She enlightened us on the working relation the several DG’s have with the Minister and how she feels the work at the Ministry changes when a new Minister is appointed. This was very insightful to hear and discuss with her about.

Thereafter, all the participants scattered around the Janskerkhof building to find their first workshop room. Even though there were some slight problems with rooms being double booked, everything turned out just fine and all workshops started in time. The representatives of the Ministries tried their hardest to give interesting workshops, whilst addressing students from several studies and interests. We feel they succeeded and were pleasantly surprised by the array of Kahoot quizzes and fun facts learned through these quizzes. The first workshop round was followed by, as you might have guessed, the second round of workshops, giving the participants the opportunity to hear from another Ministry. 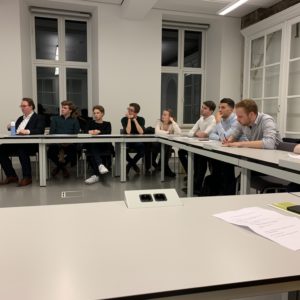 Lastly, it was time for the highly anticipated drinks to end of an informative evening. After overcoming the slight hiccup of there not being any beer (which we quickly bought from a nearby supermarket) the drinks were a success. Representatives from the Ministries and the participants had the opportunity to exchange thoughts and determine whether a career at one of the Ministries might be an option. Overall, we feel the event was a great success and look forward to organizing it again next year! 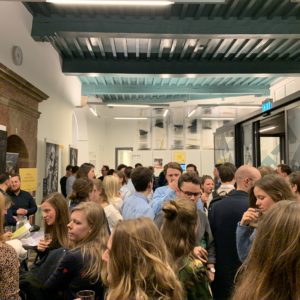