Exactly one month ago, on the 15th of October, Urios went to The Hague to visit Eurojust, Europe’s Judicial Cooperation Institute. After having passed the surprisingly strict security present at the building, we were kindly welcomed in by a spokesperson of Eurojust. 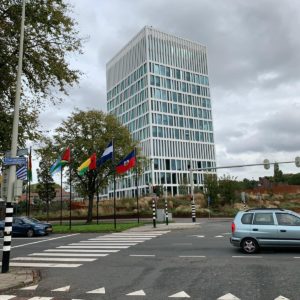 We were taken to one of the coordination rooms Eurojust actually uses in its coordinated investigations. It was quite impressive to see, as the room is surrounded by booths for interpreters to sit in and make sure everyone in the room understands what is being said. Luckily our spokesperson did speak English perfectly fine so we did not need any such interpretation.

The members joining us on this trip were all pleasantly surprised by what Eurojust exactly does and how it operates within the boundaries of state soevereignty it has to respect. It achieves this by creating 28 national desks within the Eurojust building. All these desks work together in a very intensive and, in so far as that is possible, informal manner. They do however not prosecute or investigate themselves. The national desks advise prosecutors in their home state to take certain actions, so fully respecting state sovereignty.

Joining the Eurojust spokesperson was Elise van Kluijve, a former Urios member! She was doing her internship at the Dutch national desk at Eurojust and provided us with some great insights of what it is like to work at such an organisation and how she got the position.

We have gained a lot of insight in the organisation and some of our members even said they might do an internship there! We look back on a very informative afternoon and will definitely be organizing this event next year!