Skip to content
Throwback: Urios and the EU Law LL.M. visit the European Parliament and other institutions
26 November 2019

Last week it was finally time for the European Law Masters trip to Brussels and Luxembourg. This study trip is organized anually for students from this Utrecht University EU Law master’s and members of study associations Urios. The study trip consisted mostly of visits to some of the EU’s institutions, such as the European Parliament, the Commission and the Court of Justice.

This year, we departed to Brussels with the 38 students just minutes after some students had finished their last exam of the period. Having just finished the first period of studying, the mood was good as everyone was in need of a couple days off. The bus took us directly from the city centre of Utrecht, Janskerkhof, to the doorsteps of the main building of the European Parliament in Brussels, one of the biggest and most important European institutions (not only in size of the building…).

The first speaker of the day was Michele Simonato, a former post-doctoral researcher and lecturer at Utrecht University who is currently working as a policy advisor to one of the seven political groups in the European Parliament. Because of the amount of new legislation and the high level of detail of it, all political groups have policy advisors on the different subject matters. These policy advisors inform and advise the politicians of their group on the details of the proposed EU legislation within the field of their expertise. Simonato told us about his work for the LIBE Committee of the European Parliament, the Committee of Parliament on Civil Liberties, Justice and Home Affairs in which topics such as immigration, fundamental rights and European cooperation to combat terrorism are discussed. Within the Committees the policy advisors discuss and debate the technical details of the proposed legislation by the European Commission. Whenever a discussion becomes more political, the topic is obviously left to the democratically elected Members of the European Parliament.

Having heard more about the policy advisor’s perspective to drafting legislation, we got to meet two Members of the European Parliament; Jeroen Lenears (CDA, part of the European People’s Party) and Tineke Strik (GroenLinks, part of the European Green Party). Both MEP’s told us about their experiences working in Parliament and gave us the opportunity to discuss the topics we were interested in, both substantively and more institutionally. As both MEPs were in the room at the same time, the students had the possibility to ask them about a topic where opinions between the two MEPs differed, which gave the meeting a very interesting character.

Finally, we had the chance to enter and see the room where the European Parliament votes on all the proposed EU regulations and directives: the Hemicycle. All in all, it was a special experience to be in one of the central places where new EU law is debated and voted on. We would advise anyone interested in (European) politics to visit the European Parliament, we had a blast! 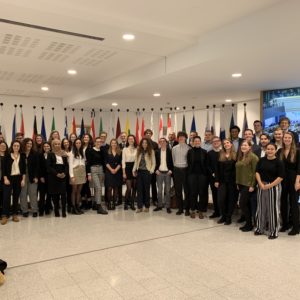 Having learned more about how EU law is enacted, it was time to see how it is applied in practice. A visit to Dutch law firm AKD’s Brussels office had been arranged and we were kindly welcomed by Tom Binder and Robbert Jaspers, two lawyers working for AKD. But not after we had been walking 20 minutes in the wrong direction, which meant we had to turn around and walk some more. We did luckily manage to get to the correct location of the office in time. Tom and Robbert gave us a presentation about the legal services the law firm offers in the Benelux, the focus of the practice in Brussels and they discussed a part of European competition law, one of the main practices in Brussels. Finally, Tom and Robbert gave us information about what ADK has to offer to law students in terms of internships and perhaps starting a career as a lawyer.

Next, it was time to go to the hostel and grab a bite to eat. After this, the most important event of the day was on the agenda: the Urios drinks! We went to Café Moeder Lambic where we enjoyed some special Belgian beers, the first of which was paid for by Urios for the students. We were joined by some professors and alumni of the Masters as well! Part of the group decided that the night was not done yet and together with them we enjoyed the Brussels night life…. which we of course regretted the next morning, when we had to wake up at 7AM.

This 7AM wake up was necessary to be on time at the European Economic and Social Committee where we were informed on the work this Committee performs. The EESC is an advisory body to the European Parliament, the Council and the European Commission on all matters of social and economic interest. Within the Committee, three perspectives are combined in their advices: the perspectives of workers, employers and other societal groups (Diversity Europe).

After our visit to the EESC, there was an hour of free time for us to arrange our lunch (even though it was only 11 AM) and relax. Having had a good lunch, we headed towards DG ECHO, the Directorate-General for European Civil Protection and Humitarian Aid. DG ECHO is a part of the European Commission that is responsible for the EU’s Civil Protection Mechanism – involved in for example jointly combating forest fires – and the EU’s humanitarian aid programs. Several students indicated that they were surprised with the extent to which these mechanisms operate. No doubt, the visit was worthwhile. 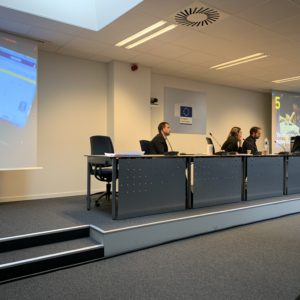 Next, we headed to the main building of the European Commission, the Berlaymont building. We were taken to the Cinema room – maybe not the wisest decision with half of our group still being quite exhausted – and waited for our first speaker Piet van Nuffel to arrive. Van Nuffel, who works for the Legal Service of the European Commission gave us a presentation on his work for the Commission Legal Service. The Legal Service department advises the Commission on all things legal and represents the Commission before the Court of Justice of the European Union in legal proceedings. The next speaker was Harrie Temmink who works for Directorate-General Internal Market. Temmink gave us a presentation that was mainly focused on the various regulations and directives within the EU’s strategy towards a Digital Single Market. Finally, Tatiana Marquez Uriarte, working for the Directorate-General Competition, told us about state aid and energy and the relation of these topics have with EU competition law.

Having seen what Brussels has to offer, it was time to head to Luxembourg. As we were a in a bit of a rush, there was no time to get dinner before going into the bus which meant that most of us survived until 9.30PM on crisps when we arrived in Hollenfels, a small village in Luxembourg. As a group, we went to the only restaurant in the village and enjoyed Italian food. Professor Sybe de Vries treated us all on a drink, for which we all thank him!

On Thursday, the last day of our trip, we headed towards Luxembourg City to visit the European Court of Justice and attend a hearing. The hearing took place in the impressive Principal Courtroom of the Court and was concerned with a case against an anonymized car manufacturer that had installed defeat devices within its cars to fix its diesel emissions (in media often referred to as the “dieselgate”). We all now know more about defeat devices and car engines than we could have ever wished for. After the hearing we had the rare opportunity to have lunch with Sacha Prechal, the Dutch Judge at the European Court of Justice, and one of her law clerks. This was a great opportunity for the students to ask everything you ever wished to ask one of the people responsible for us having to read so much case law. 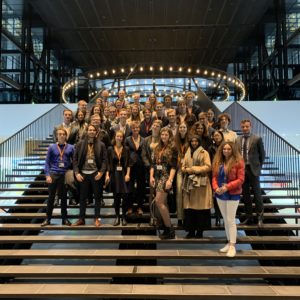 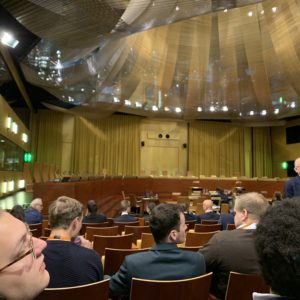 The last visit of the trip was to the European Stability Mechanism (ESM), the fund that is the successor of the European Financial Stability Facility (EFSF). The ESM, and its predecessor the EFSF, have since 2012 disbursed large amounts of money in the form of loans to prevent some of the European economies, such as Greece, from collapsing as a result of the financial crisis. It was interesting to learn how the fund is established and how it is, contrary to popular belief, not taxpayers’ money that is being distributed by the ESM but that it is actually borrowed money from the financial markets (via obligations) that is merely guaranteed by the fund. We had the chance to ask questions about the ESM itself and what it is like working at the ESM to the Communications officer, a member of the legal team and a member of the Human Resources department.

With no time to spare, we headed straight from the ESM to the bus to drive back to Utrecht. We can look back on an intense, important, inspiring and above all fun trip.