Skip to content
Interview with Egbert Boertien: one of the founders of URIOS
17 March 2021

An Interview by Anouk Hak

A few weeks ago, we had the opportunity to talk with one of the founders of URIOS: Mr. Egbert Boertien. In 1981, he founded URIOS, now 40 years ago. After a series of emails, we decided to meet each other through Google Meet. We talked about the association, the origins of URIOS, his interests in international law and his career.

Hi Mr. Boertien! First of all, we are delighted that you took the time to have a talk with us. We find it truly captivating to get to know our predecessors a little bit better.

Where are you from originally?

My father worked in Amsterdam when I was born. We moved to Eindhoven, because my father became a corporate lawyer there. After high school, I started studying in Utrecht and moved into a student house there. My parents moved to Zeeland, in the south of the Netherlands, because my father became the Queen’s commissioner there. To travel from Zeeland to Utrecht everyday was not feasible. First, I lived in a student house in Wittevrouwen, and later I moved to houses in Tuinwijk and Overvecht. After studying, my partner and I moved to Gouda, and we are currently living in Rotterdam.

So, you have seen a lot of the Netherlands!

Yes, indeed! So, I was studying in Utrecht: Dutch law, with a major in international law. Huub Audretsch was a lecturer in European studies at that time. I actually never had any classes taught by him. However, Dr. Audretsch organised several study trips, for instance to Geneva, Strasbourg, and Brussels. As a matter of fact, Huub Audretsch did all of this at his own risk. At the end of 1981, he planned a big trip to the USA for his students. Again, he was planning to bear the financial risk himself, which we did not think was fair. Therefore, we decided to start a study association. From that moment, URIOS was born.

How did this journey to the USA go? Did you also meet up with American students?

No, it wasn’t an exchange. Yet, we did visit Harvard and MIT. I have actually had a sweatshirt from Harvard for quite some time! Furthermore, we went to the United Nations and to Washington DC during those three weeks. It was an exciting journey, and most certainly a highlight of URIOS for me.

How did you come up with the name ‘URIOS’? Was it Dr. Audretsch’s idea, or did the students also have a say?

The ‘U’ is for Utrecht, of course. During that time, there was the RIO Institute: Recht van de Internationale Organisaties (Law of International Organisations). We put an ‘S’ at the back, for Study Association. As we wanted it to sound somewhat elegant, we thought URIOS was great, because of its Greek or Latin ambiance. I do think Huub had quite a big say here. In the end, it was his association. However, he always collaborated together with the students. 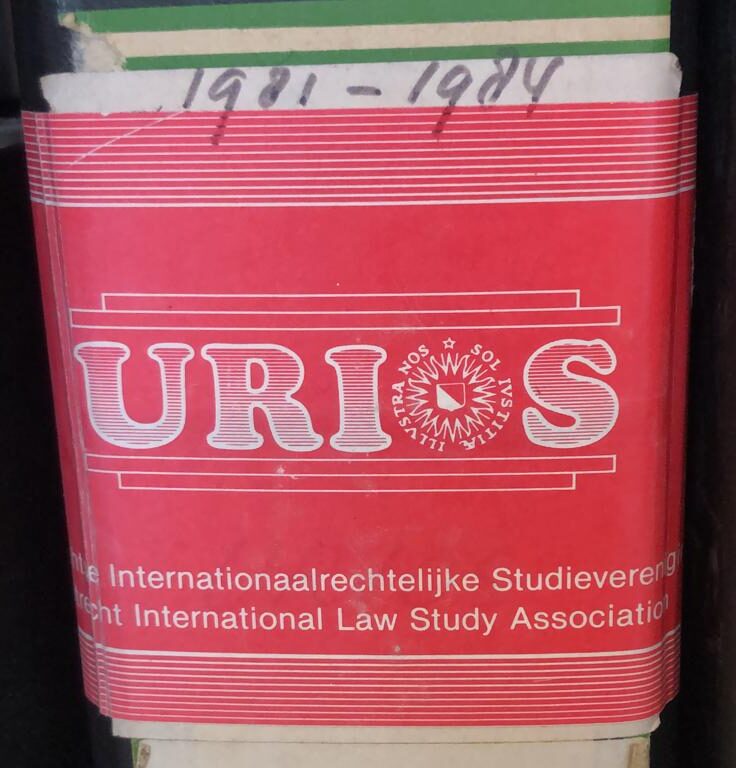 Dr. Audretsch had been on the Board of the association for quite some time, is that right?

Yes, Huub was a constant factor there, as he was the professor. We were students, so we graduated eventually. He did organise a reunion with the students sometimes, and I have visited him for his birthday. The contact with his former students was great.

Did you remain active within the association when you stopped studying?

Well, I got a job in The Hague, and I did not live in Utrecht anymore. The activities that were being organised by URIOS were mostly taking place during the weekdays, so I have not visited many of those. One time, I went to a lecture by Ernst Hirsch Ballin, which was nice. However, when you start working you will see that you do not have much spare time for many activities during the evenings, as you will be quite busy with your job.

Did you start working in the international law field immediately after you graduated?

I graduated in 1983. The labour market was terrible at that time. So first, I started a job writing passports in Utrecht. After that, I got a job at the ministry of Justice, at the department of immigration affairs. I have worked on residence permits and I was State Councillor at the Administrative Jurisdiction Division of the Council of State. At some point, one of my colleagues that was working on international cases left, and I was very interested in that function. I worked on a lot of international matters, for instance within the UNHCR in Geneva and the CAHAR (Comité Ad Hoc d’Apatride et de Réfugiés: concerning stateless and refugees) at the Council of Europe. We were already discussing the flows of refugees in Europe and how to deal with this collectively then.

Later, I worked at the department of asylum cases at the ministry of Foreign Affairs. I was responsible for the information gathering regarding the countries of origin of asylum seekers. We had to check if claims that were made were actually truthful. I was particularly concerned with the Middle East and Africa, and did that for approximately five years.

In total I spent about 12.5 years in immigration law. First at the Ministry of Justice and then at the Ministry of Foreign Affairs. Then a short period at the latter ministry in the Cabinet and Protocol Directorate, where I worked on the privileges and immunities of diplomats in The Hague in implementation of the 1961 Vienna Convention on Diplomatic Relations. Furthermore we have been working with other ministries to bring international organisations to the Netherlands, such as the OPCW (Organisation for the Prohibition of Chemical Weapons) and the International Criminal Court. Because the International Court of Justice had been located in The Hague for a long time, it was felt that the International Criminal Court should also come to The Hague. The city wants to emphasize that it is the international legal capital of the world.

Wow, hearing this, you have had quite some different jobs!

Yes, indeed, which was very valuable. In 1997 I had worked for over 15 years at the ministry. Thus, I wanted to do something completely different. I became Account Manager Government for Dell Computers. I was selling computer systems to, among others, the CBS (Statistics Netherlands).

Overall, I think that was my career. At the moment I am a volunteer for the library for the blind, where I am currently recording judgments from European law. This is actually quite wonderful, as I sometimes stumble upon the names of my former colleagues.

Were those your colleagues during your time at the Council of Europe?

Yes, at some point I was a member of three committees of the Council of Europe, so I have been in Strasbourg quite a lot. I think about six weeks a year. It is a beautiful city, and very international. I have once applied for a job at the department of Human Rights at the Council of Europe.

The thing is, when you apply for such a job, you have to go through the French system of job application: you have to sit for an entrance exam. Firstly, I had to solve a case. Subsequently, I was invited to come to Strasburg for an interview. This was a little bit frightening, as there were about twenty people judging you, consisting of your potential boss, and people from the employees committee.

Yes, it was indeed. You had to talk in one of the official languages of the Council of Europe. I speak a little bit of French, but not enough ‘legal’ French to do it in French, so I chose English. Sadly, I did not make it, even though I really wanted it. Anyhow, in the end I have had a lot of international jobs.

Looking back, what was the most remarkable job you have had?

That was the Cabinet and Protocol Department. The contact with all those diplomats, and trying to make sure that everything is arranged properly, was really very interesting. I have been able to resolve a few conflicts through conversations that might otherwise have led to a diplomatic row. It is satisfying when you succeed in something like this! With my experience at and in collaboration with the Ministry of Justice, a more fraud-resistant diplomatic pass has been developed. The old ones were made of cardboard with those rivets through the passport photo, which you can see in old passports. I also liked to do practical things like that.

So, it was a very multifaceted job?

Most certainly, yes. Whenever a new ambassador arrived in the Netherlands, he or she had to be welcomed at Schiphol. Most of the time, my colleagues from the diplomatic corps were on this. At some point, however, I was asked to do this. I had to go to the airport to welcome the Saudi Arabian Ambassador. That was quite remarkable. He even invited me to dinner together with the Dutch Ambassador who was going to Saudi Arabia. When I arrived, they asked me what I would like to drink. I told them I wanted an orange juice, as I guessed my drink had to be non-alcoholic. But in fact, it was totally fine if I drank a glass of wine. Those were some remarkable moments, and very valuable.

You have had quite some different jobs. Did you ever experience any difficulties switching jobs?

Well, there were some times where I did not have a job, but never for a long time. Right now, I am 66 years old, so I am almost of retirement age. Despite the changes of job, there has been sufficient room for pension accrual. So, we never experienced any issues. Maybe for your generation that might be different.

Yes, I think many students think that way: when you graduate you get a job, and you will have to do this for the rest of your lives, because that is a safe choice. Whereas, on the other hand, the working field for law students is extremely broad.

Yes, indeed! Well, in that case I am the perfect example that it does not have to be that way!